You are here: Home / Testimonials / Single Finger Control Over Both Sliding Doors – 25 Feb 2019

Calling Stephen at Adsafe Doors was the best thing we could have done. For years we had a heavy glass door that was hard to drag open and closed. Recently the security screen door in front had been falling off its track, as it had become worn down and pitted and the rollers were broken. With 4 dogs constantly running in and out all day long it quickly became a nightmare.

Stephen was very helpful on the phone and knowledgeable of the problems we faced and was straightforward when describing the work needed to fix both doors. He said at the end we would have single finger control of both sliding doors. We were happy with the quote provided and decided to go ahead.

We really couldn’t be happier as within 2 hours of arriving Stephen and his colleague had removed both doors, cleared the dirt, machined both door tracks and capped each with new stainless steel tracks. New double rollers were added to the glass door, and new rollers also for the security screen. The area was then vacuum cleaned of all debris.

True to his word we now have single finger control over both sliding doors. Fantastic service and the results speak for themselves. Stephen was very professional and knowledgable and many helpful maintenance tips were given so we should expect many years of smooth rolling. 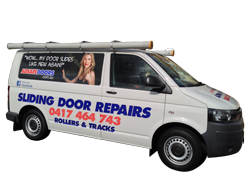 Mark Swinden
02:09 29 May 19
Fabulous customer service and arrived on time. Our sliding door was noisy and hard to open. The rollers at the bottom of the door were no longer working. They were quite tricky to remove and replace but for Stephen and Jess it was all in a days work. Extremely professional and would highly recommend this company. Thank you Mark and Jo - Kellyville

Michelle Barry
01:22 21 Mar 19
Wanting to thank Steve and team for the excellent service I received for my heavy, broken sliding door. The communication was great, they arrived on time and replaced the door frame tracks, realigned the door itself and fixed the locking mechanism in 1.5hrs. Amazing! Highly recommend this business and would definitely be calling on them again if we had any other problems. Thankyou.

margaret ratajczyk
02:11 07 Feb 19
We had a problem with the sliding door, it was very difficult to open and close it. Then a great team from Adsafe Doors – Steve and Jessie fixed it for us. Our door is sliding easily now, I can push it with one finger. Great job! Thank you, Margaret R

Chris Van Duin
00:51 19 Dec 18
Bit more expensive than what I was expecting. But the door is now better than what it was new. So silent and smooth. Feels like a much more expensive door than what it is. So very happy with the outcome. Would recommend to anyone. Job was done very quickly and professionally.

Donna McVay
05:35 06 Dec 18
Should be 10 stars. Brilliant service from Stephen and Jessie. Our stacker door was not rolling very well. Stephen and Jessie fixed it so well that it is like a brand new door. Their customer service is fantastic. It is great to see an honest and reliable company. When you have sliding door concerns Adsafe is the company to call.

Bizu Pokharel
07:02 06 Jun 18
Sliding door to my balcony was damaged from months which used to require full energy to open and close but when my door was serviced by Adsafe door Stephen it has got a new life.Thank you so much Stephen for such a proficient job will definitely recommend you ?

Jeanny Morris
06:47 30 May 18
I have this old aluminium sliding glass door. After years of repairs and never lasted long. Today I called around 4 companies, no-one was helpful. One company stated minimum $4,200 + per job or above if I accept they would send a person to come and measure. I finally got to Stephen on my 5th call, he took the time to understand my situation and given me options to considered. He suggested instead of replacing the whole door and glass unit, let's see if he could fix it instead. Stephen came as he promised and he fixed my door beautifully with absolute pride in his work. The best of it - the cost only a fraction of what others company have quoted me. THANK YOU Stephen and Jessie.

Grace Smith
05:02 04 Apr 18
Our sliding door at home had been broken for months and got so bad, it worked better completely off of it's sliding tracks. But after getting in contact with Adsafe Doors, Stephen and Jessie were to the rescue by the following afternoon. They were both incredibly friendly, efficient and had the door back on and working very quickly. I would highly recommend them to anyone in need of sliding door repairs :)

Stephanie McVey
03:10 13 Dec 17
I had a sliding door that refused to slide and a sliding security door that constantly came off its track. Stephen from Adsafe came out, fixed both doors and charged less than the original quote! I now have two doors that slide easily and a security door that provides security! Not only was the work completed quickly and professionally, but Stephen also rang to advise me that he was going to be a little later than the agreed time, due to traffic. Thanks for the excellent job and professional service.

Jane McMullan
22:39 05 Nov 17
We are so pleased with the repair done by Stephen to our sliding door. It would barely move before (and wouldn't lock) and was hanging lopsided, to now sliding perfectly. So pleased with this service. It is better than ever. The whole service from the first phone call where Stephen recommended ways to secure our place until he could repair the door to cleaning up properly before leaving was exceptional. We highly recommend Adsafe.
See All Reviews